It can be hard to tell close friends, your family and other people that you are physically separating or legally divorcing. It’s even harder to tell your children in a way that:

3) Enables them to process the information and

4) Keeps their relationships with both parents intact. 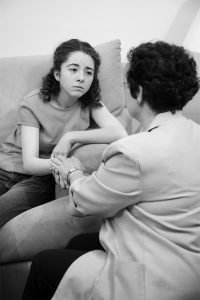 Children demand information because they are frightened. They want to know that their parents have answers about what is going to happen. They also want to know what it will mean to them. You probably don’t have all the answers yourself. In addition, courts and therapists will apply a substantial amount of pressure not to tell your children anything. They say it is too confusing. So what do you do?

The answer as to how and what you tell your child is as varied as there are different children. Some children are satisfied with a simple, “Both of us love you, but we can’t live with each other anymore. We are going to have two households.” They don’t want to know any more. They may have some questions about what the schedule is going to look like. These children will be happy with a parent telling them that they are working on it, and will let them know when there is an answer.

What Really Bothers Your Child?

Other children demand much more detailed information about the problems of the marriage. They will usually say that they are part of this family and have a right to know what is going on. They are a part of the family, and they do want the information. But that doesn’t mean that you should give them information that is developmentally inappropriate for them.

Ask your child questions to get a sense of what is really bothering them. Your child may be demanding answers during a developmental stage where children see relationships in black and white terms. You are either friends or you are enemies. Your child may be trying to figure out which category you fit into, and which category your spouse fits into. Once you realize that this is the child’s concern, you can address that problem. You won’t need to answer the specific questions about whose fault the pending divorce is.

When Answers are Inappropriate

The child may be feeling pressure from a parent to give information, to take sides or to listen to the other parent’s anger and frustration. Telling your child it is an adult issue gives the child the tools to tell the parent or grandparent or friend that the child will not be put in the middle and to express the child’s feelings about being put in the middle.

The Worst Response is No Answer

The worst response is to not answer the questions at all. This may be a timing issue. Maybe you cannot talk about the divorce at that moment without breaking down and crying. If that is the case, then tell your child that you are having a hard time talking about it right now, but will get back to them. Then make sure you take the time and opportunity to talk to them.

If you don’t say anything, it is not uncommon for the child to believe that the divorce is their fault. They didn’t pick up their toys when they were told to do so. Or they made the parent who is leaving the family home angry. The child may not even voice that concern, but it consumes much of their thinking and their fear.

When you do talk to your child, be sure to tell them that the reason for the divorce is between the parents, and is not the child’s fault. Even if the child hasn’t voiced a concern, the idea is in the child’s head when the thought does occur to them.

Sometimes the child has been a witness to arguments or domestic violence, and has strong feelings about the other parent. It’s hard to then tell the child that both parents love them and are going to protect them, when that is not the child’s experience. The key is listening to your child. Figure out what their real concerns are, not just the questions that they are asking.

This is a great time to think about the Parenting Mantra: What is your goal? What are the facts? How does applying the facts to your goal affect your children?

The Psychological Effects of Divorce on Kids
https://www.verywellfamily.com/psychological-effects-of-divorce-on-kids-4140170

Regardless of age, gender, and culture, children of divorced parents experience increased psychological problems. Divorce may trigger an adjustment disorder in children that resolves within a few months. But, studies have also found depression and anxiety rates are higher in children from divorced parents.

The Impact of Divorce on Young Children and Adolescents
https://www.psychologytoday.com/us/blog/surviving-your-childs-adolescence/201112/the-impact-divorce-young-children-and-adolescents

The Psychological Effects of Divorce on Children | Latest …
https://attorneyatlawmagazine.com/psychological-effects-divorce-children

Divorce is known to cause behavioral problems in children, such as delinquency, impulsive behavior, and conduct disorders. Studies have shown that kids with a two-parent family and home are less likely to indulge in such behavior. Children of divorce also experience more conflict with peers and as they age, this doesn’t improve.

The Impact of Parental Alienation on Children | Psychology…
https://www.psychologytoday.com/us/blog/co-parenting-after-divorce/201304/the-impact-parental-alienation-children

As reported by adult children of divorce, the tactics of alienating parents are tantamount to extreme psychological maltreatment, including spurning, terrorizing, isolating, corrupting or exploiting, and denying emotional responsiveness (Baker, 2010)

Buy “Getting Past Ugly”
Go to Top
Call Now Button